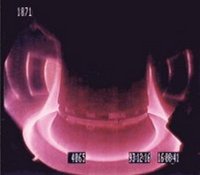 When Iagreous blocks arrive at fuel processing plants, the jet-black cubes are placed in reactivating conveyors, which expose the Iagreous to specific nuclear isotopes in an electrically charged field tuned to the EM etching still present in the nulled Iagreous. This process results in a partial re-energizing of the substance, but only to a high-energy gaseous state commonly known as “refined fuel”, though in professional circles will be referred to as Iagreon. The final leap to becoming plasma will only occur when it is exposed to a simple but intense electrical discharge, which addresses safety concerns while it is in this marketable state. Iagreon, or “refined fuel” is then sold to vehicles, docks, and all other Iagreous-based reaction systems. While the substance itself is plentiful in the galaxy, it is understood that it is not entirely renewable. There are a wide multitude of power systems in place which vessels and the like can use, such as fusion, hydrogen cells, or photovoltaics. However, there are few being utilized that are as potent or cost-effective as Iagreous. -User:lambert

In its plasma state, it can be electromagnetically contained and distributed. It can be used to generate electricity (through induction) and for propulsion (either by releasing the compressed plasma directly or driving an axial turbine).

Tested by rough experiment, the calorific value of Iagreous fuel (burnt in the VTOL down-thrusters of an E-10) is around 195 MJ/kg. Compare this to a rough value of around 43 MJ/kg for standard jet fuel. That is equivalent to 46.6 kg of TNT per kilogram of Iagreous.