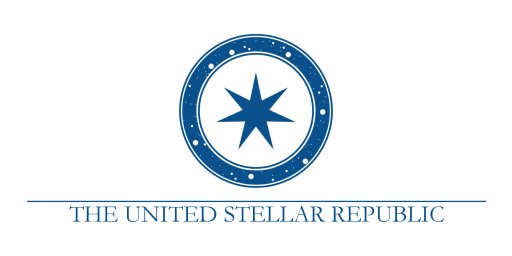 The United Stellar Republic is a system of government designed (and repeatedly revised) to act as a common thread of law and order throughout the systems that fall under its jurisdiction. It consists of executive, legislative, financial, colonial, and judicial branches that have various checks against one another. Democracy is carried out on a stellar level with each USR citizen (including colonists) casting votes at will.

The USR began as the United Confederacy of Systems (commonly shortened to the United Confederacy) shortly after the human race made its way into space. As the number of systems grew, communication became increasingly strained, requiring fleets of FTL-capable ships to ferry information across dangerous expanses of open space since traditional means of signal propagation were unusably slow.

This culminated in the Alor Prime Incident, in which a series of UCS cruisers laid waste to a mutinied colony resulting in the deaths of 162,000 people. The fleet returned to USC space after a six month long journey and found that the conflict had ended via peaceful settlement four months PRIOR to the desolation of the colony.

The Alor Prime Incident, in tandem with numerous other similar incidents and a general inability to maintain control, caused the fall of the United Confederacy.

It was the refinement of instant, digital (binary states) communication over quantum-entangled atoms which led to the reformation of a stellar government in the form of the United Stellar Confederacy. Further advancements into counterfactual quantum communication vastly optimized the ability for remote locations to be set up as communication hubs. This led to cheap, widespread relaying of information and laid the groundwork for a stellar democracy, The United Stellar Republic.

The USR is a five-tiered government body created with a highly decentralized structure so as to minimize required communication and oversight as USR-space expands exponentially over time. The goals of the government (stated in the USR constitution) are to "regulate interstellar affairs with interstellar solutions." It is expressly forbidden in the constitution to dictate law pertaining to any single system or local area (though some exceptions have been made).

The Executive Council is the executive body that handles execution of the law and oversees all implementation in a highly distributed, expandable way. The various members (i.e. planetary government representatives) oversee military and policing across USR-controlled space, including all colonies (The Colonial Marshals)

The council, if it can truly be called that, is organized in a flat structure: one governor from each province and colony larger than 25,000 citizens, or in special cases those with important strategic or economic importance (such as Yonmaran in its early days). Meetings of the full council are rare and there is very little regular interaction between members outside of warfare with external or internal enemies and the occasional deployment of marshals to keep an eye on heated areas.

Due to the fragile nature of most planetary nations and their frequent inability to agree on a planetary representative, the average tenure of a council-member is under a year. Some officials in various tiers and departments believe that the council should be restructured to use a sharded approach, in which multiple "shard leaders" from a planet would collectively represent a single seat on the council. Legislature to this effect has yet to be introduced.

The tendency for a smaller colony or planet to "go dark" has also been seen. This is typically not due to any catastrophic reason, but rather that planetary populations often disregard stellar government when it does not benefit them, only to then re-enter it again when it does. This is technically legal and no repercussions can be made by the executive.

The Law Council is the legislative body that creates and maintains stellar law, which strictly dictates interstellar-level solutions and rules. The magistrate oversees and checks the creation of laws and ensures that new legislature falls within the bounds of the constitution.

The Economic Council is a late addition to the USR which focuses solely on the subjects of interstellar trade and economics. Initially, these responsibilities were spread through the other councils. The executive would handle trade enforcement, the colonial council would handle establishment of new routes, etc., but the rapid expansion of USR space dictated a separate, more focused council to handle such matters.

The Economic Council's goals are two-fold:

Departments of the USR are non-decision-making bodies used primarily as sources of investigation and information gathering/archival. New departments come and go, get melded with other departments, split into multiple departments, etc. every few years.

Placement within the departments is handled by the Department of Organization's Recruitment Division, a fairly independent branch which seeks out and recommends candidates for departmental roles. Candidates are then recruited by the executive. Due to the forceful nature of some recruitment operations and the lack of choice many of the candidates have (notably specialists in various fields, such as medicine), the division is commonly referred to as the "USR's boogeymen" or the "abduction division." Regardless, due to the significant compensation of most departmental careers and the prestige it indicates in most fields of study, typical candidates are more than happy to cooperate with the recruiters.

"Department Farms" are schools which either have contracts with departments to train students in a particular curriculum, or are run directly by a given department. The Department of Organization has expressed disdain for this practice, as it "stifles creativity and the expansion of departmental knowledge."

Laws that can be roughly traced back to those created on Earth and its many governments and societies and not involving situations with multi-system or governmental impacts. They are also referred to as the old laws, basic laws, given laws, or more often local laws. These laws are unwritten in an official USR capacity, though the Department of Archives does maintain a list for strictly historical purposes. This is not to say that breaking common laws does not warrant punishment or that these common laws are not documented and maintained at a local level. For example, murder and theft are not covered in stellar law, but are covered in most local jurisdictions.

The allowed existence of common law, as opposed to moving exclusively to USR law, is based in the general understanding that most planets, moons, stations, and star systems have different cultures. These cultures can vary greatly based on innumerable social, economic, geographical, and other reasons and are likely to vary more as settled space grows. Allowing systems to maintain their own set of laws common to their people that roughly match those common, human laws from Earth prevents extensive bureaucratic oversight by the executive branch, and extensive additional work by the Stellar Council. It limits the size of the stellar government even as the size of settled space grows exponentially.

Common law does occasionally mesh against stellar law in many cases. The most prevalent example being theft, and the multitude of ways that one can steal from another. Stealing another person's money from their house or a local bank is not covered by stellar law but is known to be culturally wrong and thus typically falls under local common law and executive punishment. However, stealing from a Veridian Bank account via some means of hacking or manipulating stock markets to steal money from billions can fall under stellar jurisdiction since the effects have multi-system effects.

It is for the same reasons stated above that political strife, wars, genocide, and other events localized to a planet typically do not register on the Executive Council docket. The exception to this is that relief efforts for refugees or peoples fleeing local famines will occasionally be sought out.

Colonial Law is the only major exception to common law, in that since colonies are extensions of the USR and do not have an established believe system or set of local laws, a common set is provided to them all. The Colonial Common Laws are set and maintained by the Colonial Council. The Alamarian Reform placed limits (primarily financial and tax related) on these laws, however, and made it easier to colonies to transition to independent provinces, or, at the very least, determine their own set of laws and regulations that better fit their immediate locale.