Template:Infobox Planet Vieneo, named from the Swahili word (maeneo), meaning "province" or "extent of area") is the only natural satellite of Iomere and the only habitable body for almost 70 parsecs.

It was discovered by Captain Ruben Evans (USV Flying Mast) on February 16, 2218 and was coincident with the discovery of the Yonmaran System. Vieneo was named in honor of the |United Stellar Republic's claim and his Waswahili heritage.

A majority of the trade outposts and settlements have occurred near or on Vieneo. The moon is rich in atmosphere and minerals and is able to support a variety of life, though no indigenous beings have been found. It is beleived that Vieneo was once a moon of the planet Ostlon, a gas giant near the edge of the Yonmaran System. At some time in the distant past, Ostlon was destroyed, leaving in its orbit a huge debris field containing many exotic gas and particle forms, as well as two remaining planets. By laying in-line with the galactic plane, this outer debris field encapsulated the entire system, and was partially to blame for the Yonmaran System's ability to evade sensors. 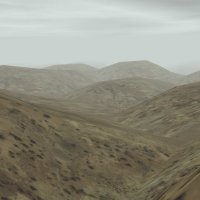 Vieneo's surface is mostly high-density rock and organic compounds with only 9% of the surface covered in highly salinic water. Vieneo's surface has patchwork regions of broken terrain indicating intense geological activity in the moon's past, and is criss-crossed by huge canyons.