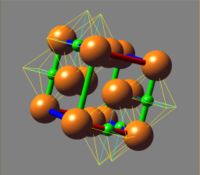 Iagreous is a naturally occurring, highly volatile substance found in ultra-high pressure environments, such as sub-tectonic strata or dense deep-gaseous planetary layers. Often utilized as a potent fuel source, it was originally discovered by accident during a remote scientific mission to observe the exposed core remnants of Nede 7, a planetary group laid waste by a collision with a “wild” asteroid field thrown from the nearby system of Barcus 9. Little could those scientists see from scan data, the potential and wide-spread impact their discovery would make. -User:lambert

Iagreous in its formed state is a stable, diamond-hard crystalline substance with an ultra-dense, high-energy matrix of unstable molecules held in check by immense pressure. When the Iagreous is removed from its high pressure environment, the inherent qualities of the material become evident as a small amount of the solid Iagreous can immediately jump to a high-volume plasma state - one of few known substances outside a laboratory to do this. Because it often forms within a planetary body, the environment causes the Iagreous to be etched with geomagnetic fields specific to the location where it was created. As the Iagreous transforms into an energized ionic state, the plasma emits and reacts to the specific EM frequencies it was exposed to, resulting in a wide variety of Iagreous brands and grades, each with their own capacities. -User:lambert

Once Iagreous reaches a plasma state there is an immediate peak in temperature and energy before it dissipates and condenses into several unremarkable gases, some of which can be siphoned off to be recombined into a breathable atmospheric mix, useful for self-sustained shipboard operations. It is because of this abrupt and violent reaction that Iagreous had not been discovered until recently, with every naturally occurring iagreous vein often igniting in magma, or other low-pressure but unobservable setting. In order to extract Iagreous, deep-core remote drilling heads have been developed to harvest the raw ore. Forming often as wide plates, some kilometers across, Iagreous demands that it be removed under pressure. However, as the drilling technology is unable to fully replicate the pressures required to keep the substance neutralized, it takes advantage of another Iagreous trait. While keeping the Iagreous partially pressurized, it is scanned for magnetic etching, and is then exposed to counteracting EM frequencies resulting in a nulled, stable condition in which the Iagreous is no longer volatile, and no longer able to leap to a plasma state. The ore is then moved via corkscrew bundles to the surface where it is ground, filtered, and impurities removed. After being pulverized into a ultra-fine powder, the Iagreous is formed into large, transportable blocks, capable of being hauled in conventional containers and vessels. There is little danger from Iagreous in its nulled state. -User:lambert