The artificial horizon has been in most aircraft since shortly after that end of the Second World War. The brown symbolizes the ground and the blue is for the sky. The green or red Direction Bug shows the direction you are traveling and a red on shows a reverse of your heading. The Target bug behaves similar to the Direction Bug Green in front red behind you, and will lead you on a great-arc to your target. The Indicated Air Speed, Ground Speed, and Vertical Speed are also listed here. A compass is attached to the top of the Artificial Horizon. the top left corner also showns the AutoFlyte mode if it is turned on

The first attempts at an instrument to indicate attitude were liquids in a clear jar or vial. This did not work well because as you increase the centripetal forces laterally in a turn the apparent gravity in the cockpit could still be straight through the floor. In a coordinated turn there is no slip so the liquid would stay level.

Once a gyroscope could be made that would fit in an aircraft they were rapidly adapted to work in aircraft. A gyroscope will try to stay rigid in space regardless of the external forces.

The artificial horizon was one of the vacuum operated instruments. A vacuum pump pulls air out of the instrument case a filtered inlet lets air in the case this flow spins up the gyro.

A spinning gyro can “tumble” this is cause by extreme pitching or banking. To prevent tumbling early artificial horizons had a “cage” to lock the gyro in a vertical position. This would prevent damage to the system.

The sky is usually represented by blue and the ground is usually brown. In most the “ground” in the instrument moves around to stay level with the ground outside. In some rarer models the “aircraft” moves and the ground stays level, this type is not the norm.

By replacing the physical instrument with a television monitor you can place the display for several instruments in the same place. Multiple displays allow you to move the display to a working one in an emergency. 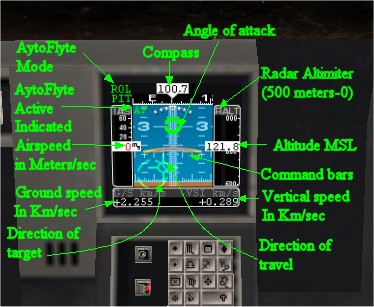 The Glass cockpit has the descendant of a gyroscope but it is hidden away deep in the avionics bay not taking up valuable dash space with vacuum plumbing, lasers, or wiring.