Vectors will be the key to understanding life in space. We of course are most interested in definitions 1, 2, and 3. Simply put a Vector can be used to describe were you are and what direction you are going. The best way to look at vectors is in a real problem. 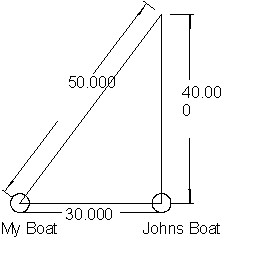 My boat it 30 km west of John. John is traveling at 40 km per hour north If I want to catch him I need to sail at 50 km per hour NNE. Simple. John’s movement and my movement are vectors. Boats, planes, cars, trains all travel along vectors. It is just we don’t thing about it because they SHOULD face the direction of travel. In Space there is no friction so the nose and direction traveled are often not the same. 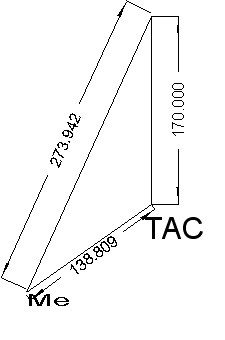 I want to catch TAC it is traveling along the north line at 170 km per hour Even though I am currently only 138 km away I need to fly along the vector at 273.942 to catch it Remember TAC never stops moving. If it did it would fall from the sky. So to catch TAC I would set the TVM close rate to 138.809 and keep the nose pointed right at TAC. But I would be traveling 273.942

Now for what gets most people confused. Since you are in space the direction you travel has nothing to do with the direction of your nose.

In Figure 3 we see what happens when I want to get to TAC and it happens to be traveling due north at 240 km and I am north and west of the station to close the gap I need to move in a north east direction not a south east like I would be pointing the nose of the ship. Remember even though the ship is pointing one way it can travel another.
rana 15:17, 14 March 2007 (HKT)