The GPWS (pronounced jip-wiz) is an ackronym for Ground Proximity Warning System and is a safety device factory standard in aircraft and aerospace vehicles to alert the flight crew when one of the following thresholds are exceeded. 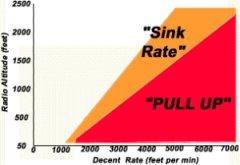 Has two (2) boundaries and is independent of vehicle configuration.

Penetration of the first boundary generates the repeated aural alert of "sink rate".

Penetrating the second boundary causes the repeated aural warning of "WOOP WOOP, pull up", until the rate of decent has been corrected. 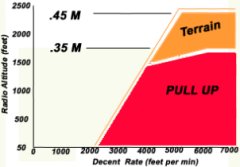 It has two (2) boundaries, the first causes an aural alert of "terrain, terrain", followed by the repeated aural warning of "WOOP WOOP, pull up". After leaving the "pull up" area the repeating "terrain" message will be herd while in that portion of the envelope. If both boundaries are penetrated while in the landing configuration, only the repeating "terrain" aural alert will occur. If the landing gear and wing flaps (where applicable) are not in the landing position when leaving the "pull up" area, 91.5 meters MSL altitude must be gained before the aural "terrain" alert is silenced. As the IAS increases with the gear up, the highest altitude at which a mode two alert warning will occur is increased to 746.5 meters. This higher portion is inhibited with the flap inhibit switch on. 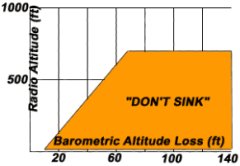 Provides an alert if a decent is made during initial climb or climb after rejected landing. The aural alert is a voice message "don't sink", repeated until the condition is corrected. It is effective between 15 and 215 meters AGL and generates the alert when accumulated MSL loss equals approximately 10% of the existing AGL altitude. This mode does not arm during decent until below 60 meters AGL. 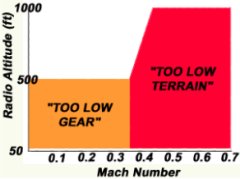 This is the terrain clearance mode with the gear retracted, is armed after take off upon climbing through 215 meters AGL. When this envelope is penetrated at less than a given IAS the aural alert "struts" is sounded. When the envelope is penetrated at more than a given IAS the aural alert "too low, terrain" is sounded and the upper boundary of the envelope is increased to 305 meters AGL. The message is repeated until the flight condition has been corrected. 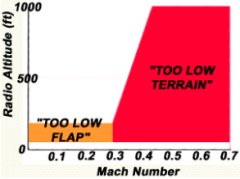 This mode provides an alert when the gear is down and the flaps are not in landing position. If the envelope is penetrated at less than a given IAS with the flaps not in the landing position, the aural alert "too low, flaps" is sounded. When the envelope is penetrated at more than a given IAS, the aural alert of "too low, terrain" is sounded and the upper boundary is increased to 305 meters AGL. The voice messages continue to occur until the flight condition has been corrected. The "struts" alert takes priority over "too low, flaps". The "too low, flaps" and associated "too low, terrain" alert are inhibited with the flap inhibit switch on. 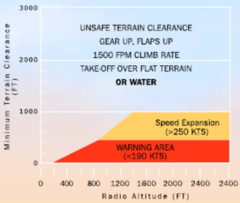 Mode 4C is based on an EGPWS computed Minimum Terrain Clearance (MTC) floor that increases with Radio Altitude. It is active after takeoff when the gear or flaps are not in the landing configuration. It is also active during a low altitude go-around if the aircraft has descended below 245 feet AGL (or 150 feet depending on aircraft type). At takeoff the Minimum Terrain Clearance (MTC) is zero feet. As the aircraft ascends the MTC is increased to 75% of the aircraft’s Radio Altitude (averaged over the previous 15 seconds). This value is not allowed to decrease and is limited to 500 feet AGL for airspeed less than 190 knots. Beginning at 190 knots, the MTC increases linearly to the limit of 1000 feet at 250 knots. If the aircraft’s Radio Altitude decreases to the value of the MTC, the EGPWS caution illuminates and the aural message “TOO LOW TERRAIN” is enunciated. EGPWS caution lights extinguish and aural messages cease when the Mode 4C alert envelope is exited. If the Aural Declutter feature is disabled, mode 4C alert messages are repeated continuously until the Mode 4C envelope is exited. 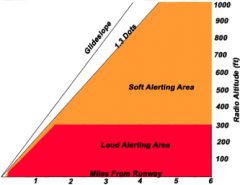 This mode alerts you of a descent of more than 1.3 dots below an ILS glideslope. The envelope has two areas of alerting, soft and loud. In both areas is a repeated aural warning of "glideslope". The voice message amplitude is increased when entering the loud area In both areas, the aural warning repetition rate is increased as glideslope deviation increases and radio altitude decreases. The mode is armed when the autoflyte vertical mode "G/S" is captured. Mode 1 through 4 aural alerts and warnings have priority over mode 5 aural alerts.

For more than 30° of bank left or right you will receive a "BANK ANGLE" callout.