Vieneo is a terrestrial moon and the only natural satellite of Iomere, the fourth of six planets in the Yonmaran system.

A majority of the trade outposts and settlements of the Vieneo Province have developed on Vieneo, notably the city of Deois. The moon is rich in atmosphere, liquid water, and minerals but is devoid of indigenous life. Vieneo is the only body meeting the United Stellar Republic's suitability criteria for a radius of approximately 70 parsecs

It is believed that Vieneo was once a moon of the planet Ostlon.

Central seat of governance for the Vieneo Province of the United Stellar Republic. 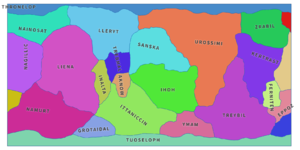 Due to the lack of distinct continents a total of 21 regions have been carved out based on surface features and composition.

Deois , the capital of the Vieneo Province, is the only settlement officially chartered as a city. Numerous other settlements exist, many of which are in the process of applying. Lucinda Smith of the Yonmaran Sentinel wrote in 2242 that "every town, hamlet, farm, mine, and abandoned Steerhead on Vieneo is trying to become the next official city, and yet nobody knows what that even means. It is as if these places believe they will become the next Deois overnight."

Vieneo is named from the Swahili word (maeneo), meaning "province" or "extent of area".

Vieneo was discovered by Captain Ruben Evans (USV Flying Mast) on February 16, 2218 and was coincident with the discovery of the Yonmaran System. Vieneo was named in honor of the United Stellar Republic's claim and his Waswahili heritage. The moon is forever linked to the history of the province which was named after it. More information can be found here. 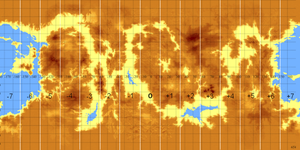 The moon is divided into 15 time zones of 24 degrees longitude and just shy of 1 hour each (57 minutes 43 seconds).

Vieneo's surface is mostly high-density rock and inorganic compounds with only 13% of the surface covered in highly brackish water. 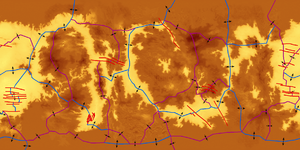 The surface has patchwork regions of broken terrain indicating intense geological activity in the moon's past, and is crisscrossed by huge canyons. Approximately 70% of this was attributed to underground faults which caused rivers to change directions and create rigid changes in elevation. 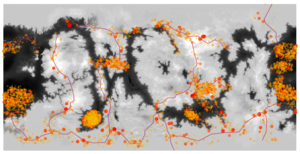 Compared to Earth, Vieneo experiences less frequent quakes but with a higher magnitude on the order of 1 to 2 Richter units (10-100 times the energy output). 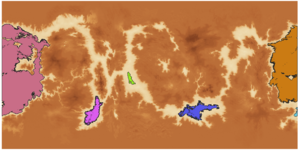 There are 4 major bodies of water on Vieneo in order of area:

Being a moon of Iomere, which was a known harbinger of intelligent, humanoid life in the ancient past, scientist have long fawned over Vieneo as a potential source of information on Iomere's former inhabitants. Thus, it is frequently a destination for field work in various disciplines of astro-biology. To date, evidence of any Iomere life-form having visited Vieneo is inconclusive at best and most experts on the subject do not believe that the life on Iomere made it beyond a shallow orbit around the planet (if that).

Noted Iomere expert Science Officer John Kling of the Department of Biology does, however, note the similarities between artificial craters found on the surface of Iomere and those found in two locations on the surface of Vieneo. In both cases (Iomere and Vieneo), the craters contain trace amounts of trinitite, leading to three primary theories regarding the prescience of the Vieneo craters:


It should be noted that while proof of nuclear weapon use by the ancient Iomere population is held as entirely plausible in most scientific circles, it is not commonly believed that the use of atomic weaponry triggered or even exacerbated the cataclysmic event which led to the expulsion of Iomere's atmosphere and the extinction of the beings that resided there.

Freelance scientist (officially an archivist) Bob Owen of the Department of Archives theorizes that since there are no known signs of the Iomere population having reached orbit at all, it is possible that the atomic warheads came from far outside the Yonmaran system and traveled for tens or even hundreds of millions of years at STL speeds through open space prior to impact on Iomere and its moon. Owen has jokingly referred to his own theory as "the bad luck theory," but has expanded on it to emphasize that the Iomere extinction event may well have been caused by a weapon launched alongside the atomic warheads or by the same ancient civilization. "Today, our military careful to track every warhead we fire to prevent it from colliding with something unintentional in the near, far, or extremely far future. What if some species or civilization millions of years before us was not so careful with their anti-ship or anti-planet warheads? What else could be flying around out there in the blackness of space just waiting to catch an orbit around an unlucky, populated star system?" John Kling called Owen's theory "science-fiction bullshit...If Owen had any talent at all for this subject, he would have been found by the recruiters years ago."

No indigenous life has been found on Vieneo despite extensive searches. Some local folklore does include beliefs in various pseudo-scientific lifeforms existing or having existed on the surface of Vieneo (or in orbit), but none have been confirmed and are unlikely to be. These beliefs were, unfortunately, intensified irreversibly by the discovery of "The Alphaville Strider", a long-deceased, humanoid corpse found by Mineral Mountain Madness crews laying geothermal piping under Alphaville. The creature was guarded for years against scientific study by devout believers but was eventually inspected by biologists and found to be the body of Ensign Jeffry A. Willis of the USV Flying Mast. Willis was lost during the founding expedition of Vieneo after he fled his outpost in the middle of the night without a rebreather and quickly succumbed to the Vieneo atmosphere. It is not known why he fled safety and this mystery has fueld even more conspiracies, notably that of the "Ederar Stalker," a four-foot tall bipedal creature with smooth, black skin, sharp claws, and phosphorescent spines that emerges from the Ederar Sea at night to feed on the children of Alphaville. When asked whether he believed in the stalker, former Provincial Governor Parval said, "I haven't seen it myself, but if I lived Alphaville, I'd listen to my parents."

Department of Biology Chief Scienece Officer Rudolf Bailey has expressed repeated interest in probing both the extensive subterranean caves known to exist on Vieneo, as well as the depths below its highly brackish bodies of water. Bailey stated repeatedly in his book "Apes of Iomere" (which takes a cursory look at Vieneo) that "the moon is known to have deep, waterlogged caverns and trenches that show signs of intense thermal and seismic activity. If life exists anywhere in modern Yonmaran, that is where it will be." Provincial Governor Parval had been an ardent opponent of such expeditions and Bailey stated publicly that "[Parval] doesn't want that moon to become a protected site" so that "he won't have to succumb to the wiles of the executive." He was referring to section 1.5 of The Alamarian Doctrine. Recently elected Governor Andrew Iodal has not yet commented on the situation.

The following sections are notes, memos, and declarations on Vieneo held by the Department of Archives.

On August 2nd, 2236, contractors establishing an outpost in the Ihoh region of Vieneo encountered decreased radio equipment reliability in the area. Upon inspection by engineers from Deois, a signal was detected coming from beneath the surface emitting consistent pulses at various carrier frequencies within a band from 2.1Ghz to 2.5Ghz. It is unknown how deep the source is. Geologists with the Deois Department of Land Management noted that the caves below the surface run far deeper and far wider than other known networks. When pressed for comment, Governor Parval responded that "there are many common things that give off arbitrary signals. I don't see how this is any different...I do not intend on using public funds to go on some wild goose chase just to discover that some kid dropped a communicator down a well, and I sure as hell do not want to involve some executive committee." Mary Stull of the Yonmaran Sentinel reported on Parval's comments, "I've never seen a well on Vieneo. Have you?"

To date, no further inspection has been carried out, but the Department of Land Management has barred further expansion into specific areas of the Ihoh region due to safety concerns with communication reliability.

On February 3rd, 2239, Department of Transportation FTL Division engineer Henry Tapar noted in a memo to his superiors that the signal discovered at Ihoh roughly matched the carrier bandwidth and general behavior of some early, experimental FTL drives' wireless communication and control protocols. He notes that the circuit design of the older FTL drives used what are now known to be unreliable chrystal oscillators with too much drift and a tendency to shift carrier frequencies, causing fluctuations at speed in a ship's ability to communicate with and control its own FTL drive. "I don't know how it could have gotten underground, but we may well have found one the lost twelve on Vieneo." To date, 13 FTL ships have gone missing, with only a single ship known to have been stolen. The other 12 ("The Lost Twleve") disappeared along with their crews after what are believed to be botched jumps, incorrect jump coordinate entry, or technical failures. 7 of these vanished ships used the experimental drives that Taper mentions in his memo. While the memo is part of public record, no official response of any kind has been catalogued and the department has declined to comment on numerous occasions.

On August 23rd, 2244, Ensign John Corgi cited strange pressurization system and instrument behavior in his rented A-4 Wanderer as having led to his August 17th wreck into an Ihoh region field (following an explosive depressurization at altitude). Investigators with the Deois Aviation Incident Response (AIR) team ruled the incident "user error" and that "Ensign Corgi simply flew too high in a craft that was not meant for such pressure and stress. No link has been found between the location of the incident and the incident itself." Ensign Corgi is reportedly seeking a book deal with publishers out of Deois.